A 7 match T20 series is being played between Pakistan and England.

In the first T20 match, England defeated Pakistan by 6 wickets.

In the second T20, Pakistan defeated England by 10 wickets.

New Delhi. Pakistan made a strong comeback in the second T20 International, beating England by 10 wickets. In the first match, Pakistan had to face defeat by 6 wickets at the hands of England. Babar Azam and Mohammad Rizwan achieved England’s total of 199 runs with 3 balls to spare. After this vigorous innings of Babar Azam and Mohammad Rizwan, Pakistani fast bowler Shaheen Afridi has taken a jibe against the critics of the opening pair through his social media post.

Babar Azam and Mohammad Rizwan scored a record unbeaten double century for the first wicket and Pakistan went on to win the match without losing any wicket. This has happened for the second time in T20 International history. The Pakistani captain registered his second century in the shortest format of the game with 110 runs in 66 balls. Meanwhile, his opening partner Rizwan continued his fine form with an unbeaten 88 off 51 balls.

Babar Azam became Bahubali, together he made 1, 2, 3, 4, 5… Not many records, Kohli-Inzamam left behind

Babar was being criticized for his poor form in the Asia Cup 2022. He could not score runs while playing at the top. On the other hand, Mohammad Rizwan was also facing criticism for his slow style rate. But this opening pair of Pakistan, along with washing the English bowlers, has also locked the mouth of the critics. In such a situation, Babar and Rizwan’s partner Shaheen Afridi praised his brilliant innings and took a dig at his critics.

Shaheen Afridi tweeted, “I think it’s time to get rid of the captain. Babar Azam and Mohammad Rizwan. So many mean players. If played properly, the match should have ended in 15 overs. He took it till the last over. Let us start a movement regarding this. No? Proud of this wonderful Pakistani team.” 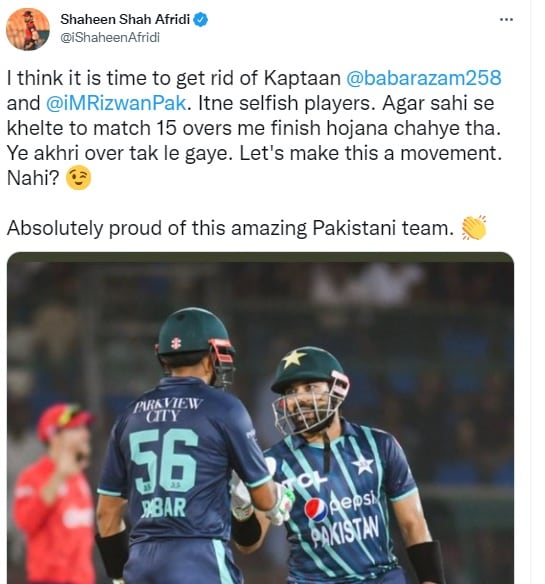