Hyderabad: To show its strength, TRS in Hyderabad has made tremendous preparations to welcome Yashwant Sinha, the presidential candidate of the United Opposition. Overnight BJP flags and banners have disappeared from the route Yashwant Sinha has to pass. BJP’s National Executive Committee meeting is also starting in Hyderabad from today. Prime Minister Narendra Modi is also reaching Hyderabad today to attend it. Meanwhile, a big news is coming out that Telangana Chief Minister K. Chandrashekhar Rao will not receive the PM at Begumpet airport.

If sources are to be believed, CM K. Chandrashekhar Rao himself will go to Hyderabad airport. Along with the Chief Minister, all the ministers of his cabinet will also be present at the airport to welcome Sinha. Whereas, shortly after this, Prime Minister Narendra Modi’s plane will also land here. But only one minister of Telangana government will go to receive them. Let us tell you that the BJP-led NDA has made Draupadi Murmu, a former governor of Jharkhand and a resident of Odisha, as its presidential candidate. 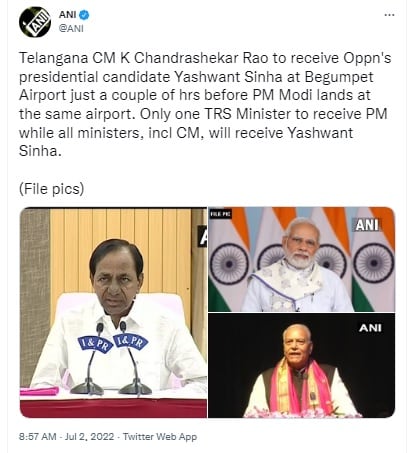 A poster war was witnessed between the Telangana Rashtra Samithi (TRS) and the Bharatiya Janata Party (BJP) ahead of Prime Minister Narendra Modi’s visit to Hyderabad to attend the BJP’s National Executive Committee meeting. Saffron and pink colored flags and banners, representing TRS and BJP respectively, were seen all over the city. 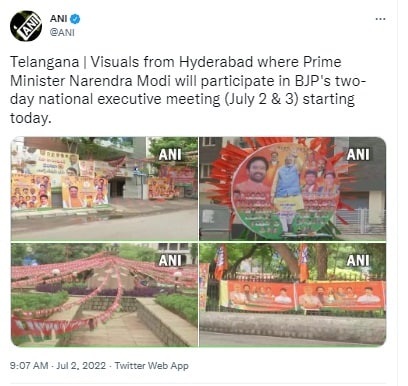 Welcoming Yashwant Sinha in the posters of TRS, the tagline was given, ‘Let’s change the change. We support Shri Yashwant Sinha ji in the election of the President of India. BJP’s posters read, ‘Welcome Prime Minister Narendra Modi to the BJP’s National Executive Committee meeting.’ Due to Prime Minister Narendra Modi’s stay in Hyderabad on July 2 and 3, the Police Commissioner has issued orders to implement Section 144. Under this, from July 1 to July 4, there is a ban on the gathering of more than 5 people in the limits of Cyberabad Commissionerate.