New Delhi. At this time, two teams have gone to India on a two-nation tour. One has reached England under the leadership of Rohit Sharma, while the other has reached Ireland under the captaincy of Hardik Pandya. The first match against England will be on July 1. But, the T20 series from Ireland will start from Sunday itself. Hardik will take the test for the first time as the captain of Team India. At the same time, through this tour, the Indian team management will also test their bench strength. But, good news is not coming out about the first T20. This is because rain has been predicted during the first T20. This match between India and Ireland will start at 9 pm Indian time.

According to Accuweather.com, Sunday will be cloudy throughout the day in Dublin and there is a 90 percent chance of rain. This can happen during the match as well. If this happens, then there will definitely be disappointment in the hands of cricket fans. During the day the temperature will be around 17 degrees, which will go down further by the evening. If the match takes place in case of rain, then the conditions will benefit the fast bowlers, because the temperature in Dublin is very low right now. In such a situation, due to rain, fast bowlers can take advantage of the extra moisture. 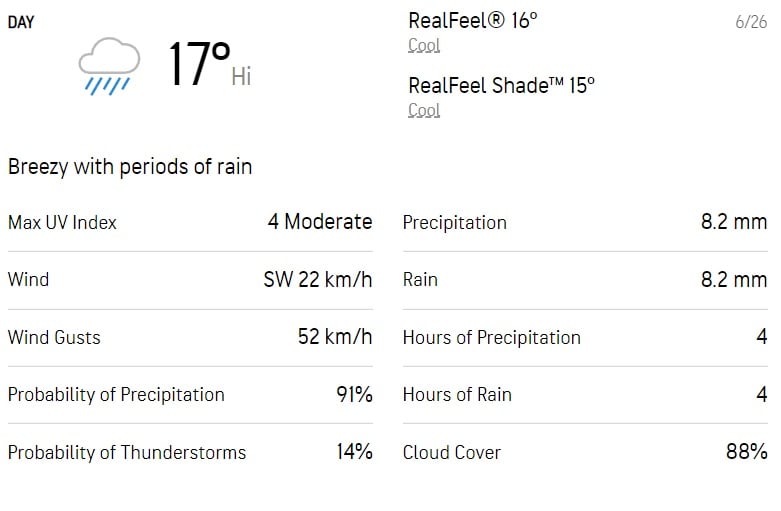 Rain has been predicted in Dublin during the first T20 between India and Ireland to be held on Sunday. (AccuWeather)

Good pitch for batting
The first match of the T20 series is to be played in Malahide, Dublin. There is good bounce in the wicket here. Fast bowlers can take advantage of this. At the same time, it is also a good thing for the batsmen, because in such a situation the ball will come on the bat well and it will be easy to hit the shot. So far 15 T20 matches have been played on this ground. In this, the team batting first has won 6 times while the team chasing the target has won 9 times. This gives an idea of ​​how suitable the pitch is for batting. A score of 180 plus has been made in 3 out of the last five T20s on this ground. The average score of the first innings at this ground is 160 and the second innings is 140. The highest score on this ground has been 252/3 and the lowest is 70 runs.

Read also: India vs Leicestershire: Iyer-Jadeja got the bat for the second time in an innings, scored a half-century, India crossed 350 runs

Ireland’s captain Andy Balbrin has also told Malahide’s wicket to be better for batting. He said, “On the pitch here, the ball hits the bat well and the mood of the pitch can remain the same in the first T20 as well.” The second T20 between India and Ireland will be played on 28 June.