On 19 June 1966, Bal Thackeray called a meeting at Shivaji Park. People started knowing and recognizing him in the public life of Mumbai. He was afraid that too many people might not come to this meeting. Even after this, he had made big arrangements for 50,000 people. 02 lakh people reached the meeting. There he formed a Shiv Sena with his friends by breaking a coconut. In this he gave his first speech.

The journey of Shiv Sena, an organization standing in the name of Marathi identity, has been more than five decades. Shiv Sena means the party of Chhatrapati Shivaji. Party formed for Marathi identity. Whose election symbol is arrow bow, then the symbol is Tiger. At present, Shiv Sena is in control of the power of Maharashtra. Uddhav Thackeray, son of Balasaheb Thackeray, heads the Maharashtra state government. However, since its inception, Shiv Sena is getting the biggest challenge from its people. The party’s credibility, strength and credibility are all at stake. From here Shiv Sena will survive, will be scattered, what will happen, where will it go – I don’t know anything.

The main base of the party is in Maharashtra itself. However, the party tried to spread on a pan-India level. It can be said that half-heartedly, therefore its national base was never formed, but its roots are very strong in the villages and villages of Maharashtra.

Then relations with BJP broke down.
Bal Thackeray first raised the voice of pure Marathi identity and then increased the strength of this organization by becoming a leader of Hindutva. Of course, Shiv Sena’s base remained limited in Maharashtra, but it increased political power by compromising with the Bharatiya Janata Party, which stood on similar views. By the way, this alliance broke after the results of the state assembly elections were declared in October 2019. However, since then the sourness and rift in it have only increased. Shiv Sena then wanted the post of Chief Minister and supremacy in the government, on this matter relations with BJP broke down. Then the party formed the government in Maharashtra in alliance with the Congress and the Nationalist Congress Party, which are considered to be arch rivals. Shiv Sena means the party of Chhatrapati Shivaji. Party formed for Marathi identity. Whose election symbol is arrow bow, then the symbol is Tiger.

continuously increased strength
The strength of Shiv Sena has increased continuously in Maharashtra since the 70s. From the assembly to the Lok Sabha, it has established itself as a major force in the politics of the state. Shiv Sena was once in the form of a social party and movement, but now it has fallen into the mold of a purely political party. Its roots in the politics of Maharashtra have become increasingly deep. By the way, even now, from the cities to the villages, its branch head still works to solve all the problems of the people, from the disputes of the locality to getting the work done in any way and the problems.

Bal Thackeray still in hearts
It is believed that the Marathas and Kunbis, who had earlier stood firmly with the Congress in Maharashtra politics, have now moved towards the Shiv Sena. Hindutva has broadly linked him to other classes as well. If Balasaheb Thackeray, the founder of Shiv Sena and who has a strong hold in Maharashtra, is still making deep inroads into the hearts of the people in the state, then the current face of the party is Uddhav Thackeray. Whose image is different from that of the father.

ever-increasing seats
If we talk about the political journey, then Shiv Sena fought the first election in 1971. These were Lok Sabha elections. Candidates fielded on 05 seats. There was no victory over anyone. For the first time in the 80’s Lok Sabha elections, 01 seat was won. On June 19, 1966, when Bal Thackeray formed Shiv Sena due to Marathi identity and the problem of Marathis angry about many issues in Mumbai, he had expected 50,000 people to come for this occasion but about 2 lakh people reached there. Crowd.

By the way, the alliance has been broken even before BJP.
Surprisingly, unlike other regional parties, Shiv Sena first contested the Lok Sabha elections. After that the assembly. He tried hard for the first time in the assembly elections in 1990. Contested 183 seats and won 52. After that his seats kept increasing. For the first time in 2009, Shiv Sena suffered a setback. The seats won came down to 45. As a result, after five years in the next elections, he decided to break the alliance with the Bharatiya Janata Party and contest all the 286 seats alone. This time it got 63 seats. After the elections, there was an alliance in the government after the BJP.

In 2019, its differences emerged with the BJP over seats, but even then they fought the elections together. This time its share got 56 seats, but differences emerged so much about forming the government that after separating from the BJP, formed the government with the Congress and the Nationalist Congress Party, which is considered to be a staunch opponent. This government is now in trouble. A large section of the party has turned rebel and it seems that it is bound to fall. Only a miracle can save it. 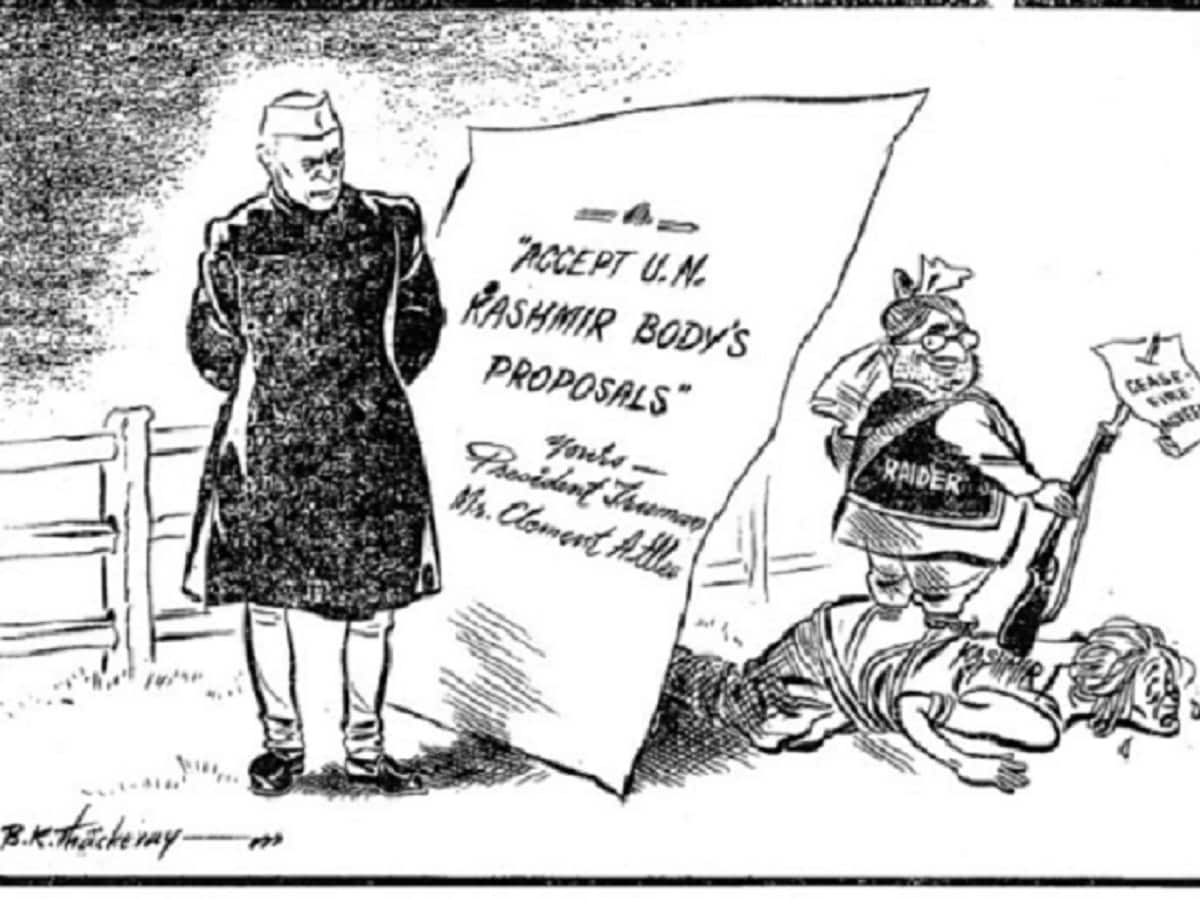 Bal Thackeray was one of the top cartoonists of Mumbai in the 60s. His cartoons were published in various places from the Times of India, but he felt that the cartoonists were not getting the freedom they should, so they started their own magazine based on cartoons. A cartoon made by him on Kashmir.

Branch chief still the backbone of the party
Sunil Gatade, who has done journalism in Mumbai for several decades and closely watched the rise of Shiv Sena, says, “Shiv Sena has changed a lot, but even now the shakha chief remains its backbone, who is in close contact with the public. Works as a bridge. Although now Shiv Sena Political Party is more.

How Thackeray who lived in trick became a big power
Now let’s see how Bal Thackeray, who lived in a trick, made himself such a big force of Maharashtra that everyone started accepting his iron, even the governments from the center to the state. He was born on 23 January 1927 in Pune. Father’s Name Keshav Sitaram Thackeray. Father had changed his name to Prabodhankar.

The title Thackeray was also taken from the name of a British writer. Mother’s name was Ramabai. Later the whole family moved to Bhiwandi near Mumbai. Prabodhankar was very talented. Editor, stage-artist, screenplay-dialogue writer, historian and social reformer. Baal was born ‘after the birth of four daughters’. Bal Thackeray had other brothers but Bal Thackeray was more pampered. In his youth, he also used to go to the RSS branch for some time.

Bal Thackeray was a good cartoonist
Bal Thackeray was a cartoonist. Dad introduced me to good cartoonists. Around 1950, he was recognized as a revolutionary cartoonist. He used to make cartoons from Churchill to Eisenhower. Cartoons were published in the Sunday edition of Times of India. Although there were controversies over his cartoons. Had to lose the job. Quit job at least thrice. He used to think that the newspaper for which he makes cartoons has a lot of restrictions regarding cartoons. In such a situation, later along with his brother Shrikant, started taking out his own Marathi magazine ‘Marmik’. Marmik means straight from the heart. There is also a story of his annoyance with the Communists.

Whose Mumbai
Bombay was settled by the British. There were 07 small islands here. Bombay was settled after bridging them. At that time South Bombay was the real Bombay. The real power of the city and all the games used to happen here. Means the area from Dadar to Churchgate. All the money transactions of the country used to happen from there. Big businessmen and people lived in Malabar Hill.

Initially, the Nehru government had also considered the option of making Bombay a union territory. Maybe because Bombay did not belong to anyone. The British started business. Then businessmen from all over the country reached here and settled down. The people of South India came here in the beginning and occupied jobs. At that time Bombay was dominated by three types of people. Gujaratis and Parsis in business. South Indians in jobs and the ordinary working class of laborers who came from North India as business partners in the service sector.

Which problem of Marathis did Bal Thackeray make an issue?
If you remember, in the 50s, when there was talk of reorganization of the states, then the reorganization movement of the state on the basis of language was gaining momentum. This was a very fast movement, which did a lot of work to uplift the regional identity. Then in Maharashtra also the Marathis demanded a state for themselves on the basis of language. Which was to be created by cutting the surrounding states. Mainly parts of Gujarat, Karnataka and Madras State. There was a big movement. Maharashtra was formed in 1960. The biggest thing happened that a diamond like Bombay started shining on the forehead of Maharashtra. It became the capital of Maharashtra.

Now another problem started to appear. The literacy rate of Marathi people was lower than that of South Indians. Although Marathis were also pursuing higher education after 1950, jobs were going more in the hands of outsiders. Bal Thackeray started making this an issue. He started raising it through his own magazine. making cartoons. through articles. First, through satire, then started taunting and then started this sharp attack. Since the popularity of his magazine was just fine. So people started coming to him with their words. There were more youth in it. educated and unemployed. A different kind of discontent was taking over the whole of Bombay. This issue was becoming a big one. It just could not get a strong voice.

The local Marathis were angry in those days.
Bas Thackeray formed an organization through this issue, which raised its voice about it and started doing a lot by connecting with the society. In those days a lot was going on in Bombay, which was angering the local people. The local traders and industrialists were worried about the strengthening of trade unions. On June 19, 1966, Bal Thackeray made it clear that Bombay would not remain the same, although the journey and struggle of the army was long, but perhaps because of this, he went on sticking with the Marathis more than the roots.

strong hold
First they became strong in Mumbai and then spread to the villages and cities of Maharashtra. Journalist Arun Yadav, who moved to Mumbai from Uttar Pradesh’s Azamgarh district a generation ago, now runs two news websites in Hindi and Marathi. He says, I have seen hundreds of days when Bal Thackeray used to call for a bandh and then not even a leaf would turn in the city. Never seen so much power of any local leader. In Mumbai and Maharashtra, everyone used to go according to him. Everyone used to call him Saheb. (will continue)